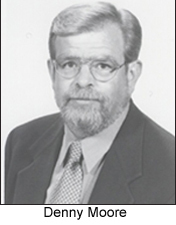 The University of Notre Dame Alumni Association will present six awards during ceremonies on campus this week.p.  The James F. Armstrong Award, which recognizes outstanding service to the University by an employee, will be presented posthumously to Dennis K. Moore, a 1970 alumnus.p. A member of the founding staff of the student newspaper, The Observer, Moore worked for 20 years in journalism and corporate public relations before returning to Notre Dame in 1988 as assistant director of public relations. He was promoted to associate director a year later and to director in 1990, serving in that capacity as the University’s principal spokesman and media relations officer, as well as directing its public relations activities. Moore was promoted again in 2002 to associate vice president in the newly created division of public affairs and communication. He was involved in overseeing several new initiatives, including the creation of a faculty/staff newspaper.p. Moore’s many civic activities included service on the local boards of Rebuilding Together (formerly Christmas in April) and the Catholic Worker house. He died Dec. 3 of prostate cancer.p.  Dr. Joseph A. DiCara, a 1982 graduate and pediatrician in neonatology at the Prentice Womens Hospital Special Care Nursery in Chicago, will receive the William D. Reynolds Award, in recognition of distinguished service to young people.p. Founder of Chicago Youth Programs Inc., DiCara serves as executive director and a volunteer for the organization, which provides educational, recreational, social, health and career assistance for at-risk youths.p.  The Rev. Louis J. Putz, C.S.C., Award, which recognizes the creation of programs that have contributed to improving the lives of others, will be presented to Richard Yeager, a 1956 graduate, and his wife, Mary Lou.p. The Yeagers’ many community service efforts include the development of the Our Father’s House soup kitchen in Pompano Beach, Fla., which provides more than 300 meals every week, and for which they help collect, cook and serve food. In addition, the Yeagers applied for and received a $100,000 UPS Foundation grant, which funded a major expansion of the kitchen.p.  Michael Tribe, a former Notre Dame football player and 2000 graduate, will be honored with the Young Alumni Award, in recognition of his service to the Notre Dame Club of Chicago.p. The youngest graduate to express gratitude for a Chicago club scholarship through his service on its Scholarship Foundation Board, Tribe also is the youngest alumnus to serve as a member of the club’s Board of Governors. Last year he chaired the Rockne Athletic Banquet, which raised more than $55,000 for the scholarship foundation.p. Tribe is a municipal bond sales associate for Banc One Capital Markets in Chicago.p.  The Rev. John J. Cavanaugh, C.S.C., Award will be presented to Adam A. Milani, a 1988 graduate and associate professor of law at the Mercer University School of Law, in recognition of outstanding service in the fields of government and public service.p. A nationally recognized expert on disability law and an advocate for the disabled, Milani, a quadriplegic paralyzed by a high school hockey injury, served as a consultant on several Supreme Court cases, including the decision that allowed golfer Casey Martin to use a cart in PGA tournaments. Milani co-founded Project Enable, which links people with disabilities to government and business leaders to facilitate opportunities presented by the Americans with Disabilities Act. In addition, he co-founded Think First, which educates youths on prevention of head and spinal chord injuries, and serves as vice chair of the board of directors for Disability Connections, which offers independent living opportunities.p. Milani co-authored “The Law of Disability Discrimination and Federal Disability Law in a Nutshell.” His father, Ken, is a professor of accountancy at Notre Dame.p.  Dr. Robert J. Perry, a 1972 graduate and family practitioner in Kingston, N.Y., will be presented with a Distinguished Alumnus Award in recognition of some two decades of pro bono medical service to the students, faculty and administrators involved with Notre Dame’s International Studies program in Angers, France.p. A former student in the Angers program, Perry returned to France after graduation and attended medical school. He practiced near Angers for 23 years before returning to the United States last year.p.