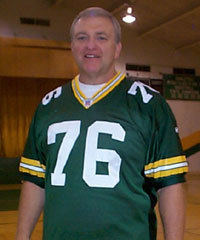 Established in 1982, the Foster Award is presented annually by the Notre Dame Alumni Association to a graduate distinguished for athletic endeavors and civic or University service.

A consensus All-America defensive tackle for the Irish, McCoy was selected second overall by the Green Bay Packers in the 1970 NFL draft.He was named the PackersRookie of the Year and twice led the team in sacks during a seven-year career inGreen Bay.He was traded toOaklandin 1977 and played for two years with the Raiders and two more with the New York Giants.

As national director of youth for Champions for Life, McCoy visits prisons, juvenile detention centers, churches and schools, to promote abstinence of sex, alcohol and drugs.He was appointed by President Reagan to the Council on Sports for a Drug-Free America and is an active member of the board of directors for the Atlanta YMCAsCampHighHarbourandCampHopefor children of prisoners.

McCoy and his wife, Kia, have four children and three grandchildren.