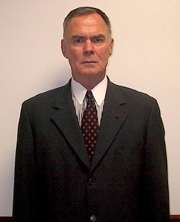 The Corby Award is presented annually by the Notre Dame Alumni Association to a graduate who has distinguished himself or herself in military service.

Matthews served inVietnam, where he was injured twice, and inBeirut, and retired following a 22-year active duty career.After earning advanced degrees fromWashingtonStateUniversity, he served for 13 years as a faculty member and associate dean of academics at the Marine Corps University inQuantico,Va.Twice he received the Elihu Rose Award for Teaching Excellence.

Currently writing a book on the U.S. Marinesexperience inLebanonandU.S.policy in the early 1980s, Matthews also is credited with helping numerous Marines recognize the need to seek help with alcoholism and lectures extensively on the issue.

As a Notre Dame student, Matthews was captain of the basketball and baseball teams.He and his wife, Marie, are the parents of three children.

The Corby Award was established in 1985 in honor of Notre Dames third president, who was a celebrated Civil War chaplain of the Union armys Irish Brigade.