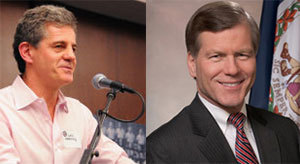 Established in 1985, the Cavanaugh Award is conferred on an alumnus or alumna (living or deceased) who is performing or has performed outstanding service in the field of government, patriotism, public service or local, state or national politics.

McDonnell, the 71st governor of the Commonwealth of Virginia, has built a reputation for his fiscal stewardship and success in closing substantial budget shortfalls without raising taxes. Virginia, where the unemployment rate has fallen since McDonnell took office in 2010, was named by CNBC as “The Top State for Business” in 2011.

Raised in Fairfax County, Va., McDonnell graduated with a bachelor’s degree in business administration from Notre Dame. He later earned a master’s degree in business administration from Boston University and a master’s degree in public policy and a law degree from Regent University. McDonnell was elected to the Virginia House of Delegates in 1991. He was elected as the 44th attorney general of Virginia in 2005. The governor also served 21 years in the United States Army in active duty and reserve, retiring with the rank of lieutenant colonel in 1997. He is the chairman of the Republican Governors Association.

McDonnell has been married to his wife, Maureen, for 36 years. They have five children.

“To be mentioned in the same breath as the past recipients of the Rev. John J. Cavanaugh Award is a tremendous, and truly unexpected, honor,” McDonnell said. “Rev. Cavanaugh’s service to Notre Dame will always be remembered, as will his leadership in setting the University’s course in the years following World War II."

The Foster Award, established in 1982, recognizes distinguished involvement in civic and University initiatives, particularly work to support children, young adults and the disabled.

Meredith was a senior captain and All-American who established a career goal scoring record for Notre Dame’s hockey team, and he went on to play four seasons with the National Hockey League’s Atlanta Flames and its affiliates when the team moved to Calgary.

After retiring in 1984, he earned a master’s in business administration from Harvard Business School and began his business career with Salomon Brothers Inc. Since leaving Salomon Brothers in 1993, Meredith has started partnerships with firms such as NationsBank, HSBC and Proctor NBF Capital Partners, a venture formed with National Bank of Canada.

In 1997, Meredith and his wife, Audrey, formed the Meredith Family Foundation. In honor of his late grandfather, John Proctor, the foundation’s core mission is to support the education and development of children and young adults as well as institutions providing services to people with disabilities.

The foundation has provided funding for the Paul E. Meredith Scholarships at Notre Dame and supported South Bend-based programs at the LOGAN Center, the St. Joseph County Special Olympics and Camp Millhouse, a summer camp for people with serious disabilities. Meredith is currently a member of the Mendoza College of Business Graduate Advisory Board. He has been married to Audrey for 20 years and they have two children.

“I am deeply honored to be receiving this award from the Alumni Association. It is truly extraordinary to be recognized by such an accomplished group of Notre Dame men and women,” he said. “Recognition carries special meaning when it comes from an institution which has played such an important role in my life, and from people who share the core beliefs and spirit of that institution. This award is even more special to me when I think about the honor of joining a list of previous winners of this award, some of whom I know and all of whom I respect immensely for their accomplishments and their character."