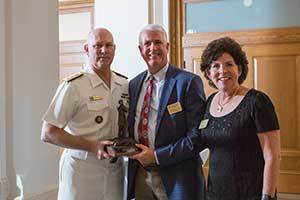 In recognition of his exemplary U.S. Naval service, including his current positions as commander of the United States Fleet Forces Command, United States Naval Forces Northern Command and United States Naval Forces Strategic Command, Adm. Chris Grady, class of 1984, was presented with the Rev. William Corby, C.S.C., Award, which honors a Notre Dame graduate who has distinguished himself or herself in military service. The award is named for the University’s third president, who served as chaplain of the Irish Brigade during the U.S. Civil War.

“I am truly honored to be a Corby Award recipient, in the truest spirit of ‘God, Country, Notre Dame’ and the Navy’s core values of honor, courage and commitment,” Grady said. “It was Notre Dame that set me on the transcendent path to be a disciplined, ethical warrior and leader, one who knows that peace and liberty are worth fighting for.”

Grady is Notre Dame’s first and only four-star flag or general officer, a seminal achievement for a University with such enduring connections to the armed forces. After graduation, Grady served in a variety of at-sea billets leading to command of USS Chief, USS Ardent, USS Cole, Destroyer Squadron 22, Carrier Strike Group One, Naval Surface Force Atlantic, the US Sixth Fleet and Striking and Support Forces NATO.

Grady is also a distinguished graduate of Georgetown University and the National War College. He served in numerous policy and strategy billets with the Joint Chiefs of Staff, the Chief of Naval Operations and the National Security Council at the White House.

He continues to serve Notre Dame through support of the fencing team (Grady was a three-time monogram winner and captain of the fencing team under coach Mike DeCicco), as a mentor to the Naval ROTC Unit and as a lecturer at the Notre Dame International Security Center. His son, Lt. Nick Grady ’12, USN, represents the fifth generation of Grady naval officers. 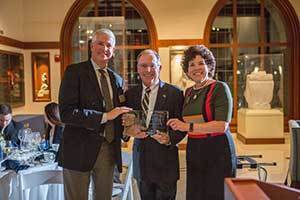 The Rev. John J. Cavanaugh, C.S.C., Award, named in honor of Notre Dame’s 14th president, honors an alumnus or alumna who has performed outstanding service in the field of government or public service. The 2019 recipient of the Cavanaugh Award is David W. Walker, class of 1981.

Walker serves as president and chief executive officer of the Coalition to Salute America’s Heroes, a Leesburg, Virginia-based not-for-profit organization. He was elected to his current role in July 2012, has been a member of the coalition’s board of directors since 2008, and served as its chair from 2009 to 2014.

Under his leadership, the coalition has emerged as one of the most respected veterans service organizations in the nation. It serves a distinct role for combat-wounded veterans by providing emergency financial aid to those at risk of bankruptcy, eviction, hunger and suicide.

Walker is a graduate of Notre Dame and earned his MBA with highest honors from the Lake Forest Graduate School of Management. He later graduated from the Innovative Leadership Executive Management Program at Duke University’s Fuqua School of Business. He and his wife, Cathie, are the parents of two daughters: Amy, Notre Dame class of 2008, and Lindsay.

“I was more than sufficiently honored to graduate from Notre Dame and to watch my daughter follow in my footsteps, but this recognition of my work with wounded veterans fills my heart to overflowing,” Walker said. “I am pleased to accept this award on behalf of all the extraordinary people associated with the Coalition to Salute America’s Heroes, whose selfless dedication to our nation’s defenders truly reflects the legacy of Rev. John J. Cavanaugh.”