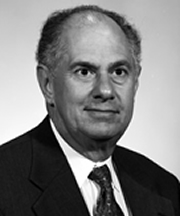 Anthony K. Hyder, associate vice president for graduate studies and research and professor of physics at the University of Notre Dame, has received the Air Force Institute of Technology (AFIT) Distinguished Alumnus title.

The title is the highest honor the AFIT awards to its alumni, only 23 of whom have received it since it was first conferred in 1979.Previous recipients include Col. Frank Borman, the astronaut, and Gen. Jimmy Doolittle, the aviation pioneer and World War II hero.

During a ceremony last month at Wright-Patterson Air Force Base, Hyder was praised asa pioneer in science, research, and developmentanda staunch supporter of the critical role education plays in enhancing the capabilities of our military.
A 1962 graduate of Notre Dame, Hyder earned masters and doctoral degrees in physics from AFIT in 1964 and 1971, respectively.He taught at Auburn University and served as its associate vice president for research before joining the Notre Dame faculty in 1991 and assuming his current position in 1993.
Hyders research largely concerns the interaction of spacecraft with the space environment and his recent work has focused on the design of spacecraft systems.

He has served on several panels and advisory boards, including the National Academy of Sciences and the National Research Council.He also is a member of the Defense Intelligence Agency Scientific Advisory Board.