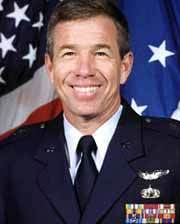 Maj. Gen. Henry A. “Trey” Obering III, deputy director of the Missile Defense Agency, will deliver the Commissioning Ceremony address to University of Notre Dame ROTC students at 9 a.m. May 15 (Saturday) in the Joyce Center.p. Obering is a two-star general who has served in Space Shuttle Program positions, including Project Engineer for the NASA Orbiter at the Kennedy Space Center in Florida, and as director of shuttle engineering at the Western Space and Missile Center at Vandenberg Air Force Base in California.p. A 1973 Notre Dame graduate with a bachelors degree in aerospace engineering, Obering earned his master’s degree in astronautical engineering from Stanford University. His military education includes the Air Command and Staff College and the Industrial College of the Armed Forces. His personal decorations include the Defense Superior Service Medal, Legion of Merit, three Meritorious Service Medals, Air Force Commendation Medal, and Air Force Achievement Medal.p. A total of 82 officers from Notre Dames ROTC unitsthe Army, 12; the Air Force, 36; the Navy, 29; and the Marines, 5will be commissioned.p.