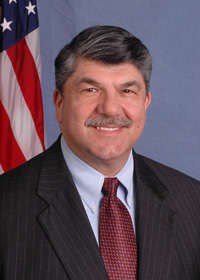 AFL-CIO President Richard Trumka will deliver the 2011 McBride Lecture at the University of Notre Dame on Sept. 14 (Wednesday) at 7:30 p.m. in the auditorium of the Hesburgh Library.

A leader and tireless advocate in the struggle for workers’ rights and economic justice, Trumka will speak on the AFL-CIO’s America Wants to Work campaign to address the jobs crisis and put people back to work.

Trumka was born into a coal mining family in southwestern Pennsylvania and worked in the coal mines for seven years while attending college and earning a law degree from Villanova University. In his years working underground, the hazards of mining exposed Trumka to life-changing lessons, experiences that shaped him far more than his academic or legal pursuits.

Trumka is committed to creating an economy that leaves no worker behind and a society that rewards hard work, and he has dedicated his life to actively fighting racism and prejudice in any form.

Prior to being elected president of the AFL-CIO in 2009, he served as secretary-treasurer of the organization from 1995 to 2009, and as president of the United Mine Workers from 1982 to 1995.

The Annual McBride Lecture was established in 1977 by the United Steelworkers (USW) “to better understand the principles of unionism and our economy.” It honors the USW’s fourth international president, Lloyd McBride, who served from 1977 to 1983.

The lecture is co-sponsored by the USW and the Higgins Labor Studies Program of the Center for Social Concerns.

This event is free and open to the public with free parking available in B2 lot, off Leahy Drive on the east side of campus.