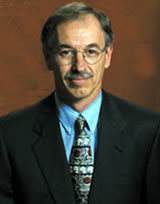 Lost in the focus on the Bushs administrations charge to NASA to return to the moon, build a permanent base there and then undertake a historic manned mission to Mars has been a discussion of how such an effort will effectU.S.aeronautics.

In an effort to address that shortcoming, a National Academy of Engineering committee recently issued adecadal surveyaimed at guiding NASA aeronautics research over the next decade. Thomas C. Corke, Clark Equipment Professor of Engineering, Aerospace and Mechanical Engineering at Notre Dame, served as a member of the committee, which met for six months prior to issuing a final report last month that calls for renewed support of aeronautics research and technology development.

Congress mandated the study and NASA funded it,Corke said.The process included both public meetings inWashington, D.C, which were open to anyone interested in the topic, followed by a series of private panel meetings.

The committee outlined a series of grand challenges, similar to those NASAs space side is pursuing, for NASA aeronautics to take on over the next 10 years.

One of the panels recommendations is to increase the capacity of the air transportation system by 300 percent in the next decade,Corke said.That means increasing by three times the number of people and goods carried by air.

The panels recommendation for increased air transportation capacity comes at a time of declining NASA funding for aeronautics research.

The Bush administrations proposed 2007 budget would cut NASA aeronautics by 18 percent, placing it at $724 million, down more than $1 billion from 2004. And with NASA committed to flying the space shuttle through 2010, completing the international space station and having a new space vehicle ready for flight by 2014, the future of aeronautics research is tenuous.

Corke also points out that in addition to its impact on the aviation industry and universities, a continued decline in funding for aeronautics research could erodeAmericas status as aviation leader and hurt theU.S.economy. He notes that a recent National AcademiesResearch Council report should raise a red flag.

Aeronautics is the largest exporter in theUnited States,he said.Last year, the total deficit due to exports would have been 50 percent higher if it were not for the aircraft industry.

At the same time that funding for U.S. aeronautics research is eroding, foreign competitors such as Europes Airbus, a Japanese effort to produce the first supersonic business jet and an emerging Chinese aviation industry are all challenging Americas role as the global leader in aviation.

We hope our committees report will make a difference and convince people of the importance of aeronautical research in theUnited States,Corke said.