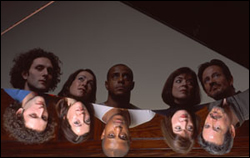 Actors From The London Stage, an international touring theater troupe based at the University of Notre Dame, will present William Shakespeare’s “Othello” in two performances Feb. 11 and 12 (Friday and Saturday) at 7:30 p.m. in the Leighton Concert Hall of the Universitys DeBartolo Center for the Performing Arts.

Admission is $18 for the general public, $16 for faculty, staff, and senior citizens and $12 for students. Tickets are available in advance at the DeBartolo Center ticket office or by calling 574-631-2800.

In his comedies, Shakespeare often pokes fun at love and jealousy, but inOthello,he shows a dark and tragic side for the foibles of the human heart.Othello, commander of the armed forces of Venice, creates a treacherous enemy when he chooses Cassio over Iago to be his chief of staff.Iago plots his revenge and, through the course of the play, emerges as one of Shakespeares greatest villains.

Actors From The London Stage has called Notre Dame its American home since 2000, when it relocated from the University of North Carolina. Its members hail from such prestigious theater companies as the Royal Shakespeare Company, the Royal National Theatre of Great Britain and Shakespeare’s Globe Theatre, among others.

The troupe’s residency is sponsored by a grant from the Henkels Lecture Series with support from Notre Dame’s Department of Film, Television and Theatre, Office of the Provost, Department of English, College of Arts and Letters Shakespeare Initiative, and the DeBartolo Center.