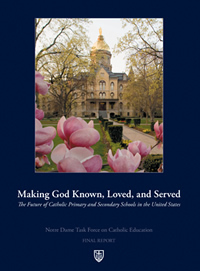 In the 12 years since it was founded, the Alliance for Catholic Education (ACE) has moved many steps beyond its original mission to prepare Catholic schoolteachers. And it will be taking many more in the interest of fortifying Americas unique Catholic school system, according to a document prepared by a Notre Dame task force for the U.S. Conference of Catholic Bishops.

TitledMaking God Known, Loved, and Served: The Future of Catholic Primary and Secondary Schools in the United States,the document points to 12 areas in which resources like ACE and its host, the Institute for Education Initiatives (IEI), can help the American Catholic Church revitalize its school system in the 21st century. (The complete report is available at president.nd.edu/catholic-schools.)

The report responds to an invitation issued by U.S. bishops in 2005 that implored Church members to help Catholic schools. Shortly after the bishopspastoral letter was written, Notre Dames president, Rev. John I. Jenkins, C.S.C., established a task force on the future of Catholic education and appointed ACE founder Rev. Timothy Scully, C.S.C., as its head.

We really looked to the part in the statement that specifically invited Catholic higher education to consider the positive, supportive roles they could play,says Father Scully.Catholic education is a key, formative experience for the Churchs members and for its future leadership. More than that, though, the schools manifest the Churchs commitment to social justice as it educates the most needy.

Father Scully assembled some 50 experts from across the U.S., who met over 14 monthsa mix of Catholic educators, diocesan representatives, philanthropists, investment specialists and Notre Dame faculty and staffto identify steps and solutions.

The problems facing Catholic schools are well known, according to John Staud, director of ACE. They include declining enrollment, affordability and accessibilityparticularly to new immigrants such as Hispanicsweakened academic quality, and fewer priests and nuns among the teaching ranks.

The task force report was released Dec. 8 to coincide with the Feast of the Immaculate Conception, a day that honors the Universitys namesake. It describes a seamless trajectory of broadened efforts that matches the strengths and aspirations of ACE with the discernable needs of the nations Catholic schools.

For example, ACEs original masters level degree program to train and educate classroom teachers has been complemented by one to prepare Catholic school administrators. Its Magnificat School project focuses on professional support and development, aimed especially at struggling inner city schools across the country.

Those efforts now will be augmented by the development of an Initiative for the Academic Improvement of Catholic Schools, coordinated by IEI, that will invest in research, development and implementation of effective assessment, curriculum and instruction.

Furthermore, the University has received a grant to work with the Carnegie Endowment for the Advancement of Teaching, assembling representatives of Catholic colleges and universities at a conferenceto create a new and robust academic field of first-rate scholars to conduct research of Catholic education from a variety of disciplinary and interdisciplinary perspectives.The Carnegie Endowment will cosponsor this conference in fall 2007.

In tandem with this effort to improve academics is a distinct endeavor to strengthen the Catholic identity of these schools. The University will call upon the expertise of the Institute for Church Life as well as the Center for Ethical Education, another IEI affiliate, to address identity issues.

IEI, ACE and the Institute for Latino Studies also will consider research and other steps to attract and support the Latino community. ACE already has taken steps in that direction by establishing the English as a New Language program last summer.

Throughout the report, the University assures the bishops that many of the advances will be supported by new resources brought in by advocates of elementary and secondary Catholic education.

Finally, the University will work with local dioceses to help Catholic schools access federal support already allocated and to explore ideas relating to policies that improve access for all children to quality education.