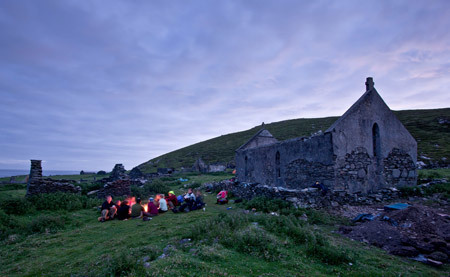 Team members end their day around a campfire made from driftwood in front of the ruins of St. Leo’s church, Inishark Island, Ireland.

The last 24 human inhabitants of the island of Inishark off the coast of Galway, Ireland, departed together on Oct. 20, 1960—a beautiful, sunny day that marked a solemn end to a steady decline that began in the mid-19th century.

That’s when a more robust population of 300 or so first began to drift away from Inishark—many sought a new life in America. By 1960, life on the island had become too remote, too hard, too dangerous, says Ian Kuijt, a professor in Notre Dame’s Department of Anthropology. “They never had electricity,” he says. “They never had phones.”

Kuijt and his team of students, academics and technicians from Notre Dame and Ireland are in a race to understand island life and capture the stories of the last 12 survivors of Inishark to preserve a portrait of their way of life before it disappears for good. The research is part of “Cultural Landscapes of the Irish Coast,” Kuijt’s six-year, multidisciplinary, inter-institutional study of coastal western Ireland. See article