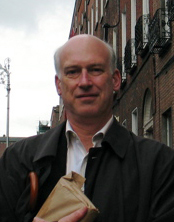 “Down to Earth” is a Midwestern book, according to its author, British poet John Wilkinson.

“More than that, it’s an Indiana book,” he says.

A research professor in the University of Notre Dame’s Department of English since 2005, Wilkinson has taught literature and creative writing at the University, as well as a graduate poetry workshop.

“Down to Earth,” described as Wilkinson’s “darkest work to date,” includes a number of the poems that reflect Indiana themes, including “Like by David Smith”:

…fabrications lift off from Studebaker’s silent yards in stainless steel…

Wilkinson was astonished to learn that Smith, whose sculptures he had seen in Paris, had attended Notre Dame before dropping out to work as a welder at South Bend’s Studebaker Corp.

Other poems in the book include “Rust Belt,” “Indiana Toll,” “Travel Plaza,” and “Back of Beyond.”

When working on a poem, Wilkinson says, “A phrase will lodge in my mind, and start to attract other things to it. It’s almost like the way a crystal is developed in a solution.”

If the development of the book had a decisive moment, he adds, it was seeing an exhibition, “Caras Vemos, Corazones No Sabemos/Faces Seen, Hearts Unknown: The Human Landscape of Mexican Migration” at Notre Dame’s Snite Museum of Art.

“The exhibition fed into a developing preoccupation with the idea that borders are everywhere. I was interested in worldwide circulations of people, of labor, of ideas.”

And it’s important to consider Indiana in that light, he adds. “Indiana is so often thought of as ‘the heartland.’ But Indiana is also a crossroads—as it advertises. It’s a place through which many people move."

Wilkinson knew he would be a poet at age 11, when a teacher asked him to convert an essay into a poem.

“I did that, and immediately had to write another on my own account,” he says. “I haven’t stopped since.”

His early interest in poetry, he speculates, might have been a connection to his father, who had died not long before—his father had often recited the poetry of G.K. Chesterton, a relative by marriage, in the car.

“But I came from a culture where the notion that you could get a job being a poet was preposterous,” he recalls.

So for most of his career, Wilkinson has led two lives—as a poet, and as a mental health professional. As a student at Cambridge, he worked as an auxiliary nurse at a psychiatric facility. He took full-time work with “the fond idea,” he says, “that the shift pattern would give me a particularly good opportunity to write.”

He moved up the hierarchy, finally becoming deputy commissioner of mental health for East London. His poetry he kept separate from his job.

“There was always the temptation to exploit to some degree what I did in my day-to-day work. But it’s a temptation I found it necessary and important to resist, for ethical reasons. And I liked having these two entirely separate lives,” he says.

A move to South Bend produced less culture shock than did teaching at Notre Dame. Wilkinson lived in Manchester, England for many years, and developed a deep affection for the British industrial Midlands—an affection that proved easily transferable to South Bend, which he calls “a similar kind of rustbelt world.”

But for someone from Europe, says Wilkinson, a university that is actively religious was an entirely new experience.

“So far as the students are concerned, the commitment to service, the readiness for response with ethical questions to text—this you would not find at a British university,” he says. “For a teacher, that feeling of eager responsiveness is a delight.”