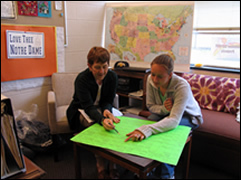 Each fall, around about the time the Notre Dame band reassembles to take its first lap around campus, Sue Cunningham began to get a parade of her own.

Students who had spent their summers engaged in the Center for Social ConcernsSummer Service Project (SSP) landed at Cunninghams office door to recount the trials of a summer spent trying to make the world a better place.

As she had for 19 years, Cunningham, the programs director, listened intently, compareed the stories to similar trials in years gone by, offered guidance on writing papers about the studentsadventures, and chortled at just about everything else.

Although she didnt start the SSP, her name is synonymous with the program, having forged its academic component. She spearheaded the effort to ensure that students receive three credits for their SSP project and that the experience has a meaningful academic element.

And while she cant take credit for starting the service programs at alumni clubs around the country, her ebullience and indefatigable promotion has played a significant role in nurturing SSP as a major initiative in at least 115 alumni clubs.

I cannot begin to explain the profound impact Sue has had on the center,said Rev. Bill Lies, C.S.C., executive director of the Center for Social Concerns.Through her dedication and passion, she has helped us to deepen our commitment to service and learning, not only on campus, but throughout the country.

The Summer Service Project was started in 1980 as anexperiential learning programmeant to encourage Notre Dame students to assist those in need while learning about the Catholic Churchs response to social problems. The learning would come as students developed a deeper, more nuanced understanding of social problem through service to such organizations as the Boys&Girls Club, Catholic Charities agencies or local homeless shelters.

The program was innovative from the start.

No one was doing anything like this,explains Cunningham.There were service trips that students organized, but no institution was actively promoting an intensive eight-week program that relied so heavily on alumni support.In the first year, five students participated. By 2004, there were 191 participants and every student received a $2,000 tuition scholarship.

Alumni support may be the key ingredient that keeps the Summer Service Project from being duplicated by other schools. Cunningham explains that the clubs assure free room and board for each student. They also work closely with the local community organizations to ensure that students receive the appropriate placement. Most clubs also provide continuing support to the agency after the student has left.

Sue has seen the value of having alumni play a key role in the program and has nurtured those relationships,says Chuck Lennon, executive director of the Notre Dame Alumni Association.Because of the alumni component, the students come to see that they are part of a Notre Dame family.

Cunningham says her greatest satisfaction has been to see former students become the support system for a new generation.Today, these doctors, lawyers and executivestwo work for the Center for Social Concernstrace their community involvement to the Summer Service Project.

Andrea Smith Shappell, director of senior transitions at the Center for Social Concerns, will take over for Cunningham. Shappell has been with the center since its inception and directed SSP before Cunningham.I know this program will continue to prosper,Cunningham said.It has tobecause Ill be watching.