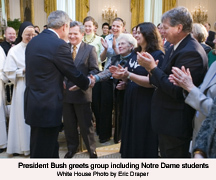 Its a yearly trip Mary Elizabeth Walter has made for most of her life. Growing up just outside of Baltimore, the Notre Dame senior joined in many family outings to Washington, D.C., for the March for Life, an event that draws some 200,000 people to the nations capital each year to rally for legal protection for the unborn.

Now in her second year as president of Notre Dame Right to Life, she has kept the tradition alive throughout her college career, traveling by bus to Capitol Hill each January with a group of students to participate in the march.

But this year was a little different.

It was kind of a surprise,Walter says of the day, about two weeks before the trip, when she learned that this would be no ordinary march experience.

The woman who coordinates the groups stay in Washington had contacted some friends of hers – who happen to work at the White House – and arranged an opportunity of a lifetime. She wanted to know, would the students be interested in meeting a certain commander-in-chief?

And, of course, we said yes,Walter recalls.

It was Bill McGurn, a 1980 Notre Dame graduate and chief speechwriter to President Bush, and his wife, Julie, who set up the presidential visit for 25 members of the Notre Dame contingent, who first enjoyed breakfast at the White House.

It was incredible,Walter says of the experience, which she found especially significant as a history major.We ate in the Red and Blue and Green Rooms, and those rooms are usually museum space, but there we were, eating breakfast while sitting on the couch that Dolly Madison sat on.

The group then joined a small crowd of about 200, including about 50 students from nearby Christendom College, in the East Room for an up-close and personal address by the president, who shared his admiration for their commitment to the cause.I see people with a deep conviction that even the most vulnerable member of the human family is a child of God,President Bush said.You’re here because you know that all life deserves to be protected. And as you begin your march, I’m proud to be standing with you.

Held each year to mark the anniversary of Roe v. Wade, the 1973 U.S. Supreme Court decision that required the legalization of abortion, the March for Lifes mission is to urge the adoption of an amendment to the U.S. Constitution to overturn the decision.

The yearly Notre Dame trip is about more than just the march itself. Participants spend time exploring Washington and learning about the history and ideology of the pro-life movement.

We try to set aside a day to explore the religious sites around D.C. – the National Shrine, the Franciscan monastery – all the sites that remind us why as Catholics, and as Christians, we believe in the right to life,Walter said.Then we take another day to explore the secular side; to try to understand why we as Americans, as humans, believe that we have the right to life.

For the first time this year, the group also spent a day volunteering at various locations around the city.

But not too surprisingly, the highlight most certainly was the audience with the president, who left the crowd with some parting words of encouragement.

As you give voice to the voiceless, I ask you to take comfort from this: The hearts of the American people are good,he said.

Walter plans to continue attending the march, even after graduation. But she knows this years trip will be hard to top.

Will we be disappointed that we dont get to go the White House? Well, well miss it,she admits, even though future trips certainly wont be lacking with the week of activities.

Its not everyday that the president says thank you and then shakes your hand and says, Go Irish!