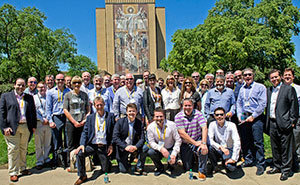 It has been billed as “the ultimate trade mission for Ireland’s top business minds,” so it seems appropriate that three days of the weeklong Ernst & Young Entrepreneur of the Year CEO Retreat were spent on the campus of the University of Notre Dame.

The 110 Irish business entrepreneurs had visited Chicago and would be on their way to New York City soon, but on Friday afternoon they were guests of the University, having lunch in the Notre Dame Stadium press box, a dramatically empty and sunlit arena to the east and the campus icons of the Basilica spire and shining Golden Dome to the northwest.

The press box luncheon was preceded by a traditional grace, said first in Latin and then, “for those of us less classically educated,” as the Ernst & Young emcee added impishly, in English. As dessert and coffee were served, the diners heard from speakers including David Murphy, Notre Dame’s associate dean of entrepreneurship in engineering and science and former president and CEO of Better World Books; several graduate students, most of them Irish, from Notre Dame’s Entrepreneurship Masters (ESTEEM) program; and South Bend’s mayor, Pete Buttigieg.

Along with their tours of the campus and Notre Dame’s Innovation Park, most of their visit had been devoted to continuing executive education lectures and seminars led by faculty from Notre Dame’s Mendoza College of Business. There were discussions on innovation, business ethics and the global impact of business policy and practice led by Ann Tenbrunsel, Rex and Alice A. Martin Professor of Business Ethics; Barry Keating and Jeffrey Bergstrand, professors of finance; and Carolyn Woo, former dean of Mendoza College and now president and CEO of Catholic Relief Services. The entrepreneurs would later that evening have a dinner at which former Notre Dame football coach Lou Holtz would speak. But the press box luncheon was a time to marvel at and celebrate the multiple and complex cultural ligature that connects Notre Dame, Ireland and South Bend, and a time to dream of its strengthening.

Organizers of the Ernst & Young retreat said its purpose was “to challenge and inspire Ireland’s entrepreneurs to enhance their growth strategy on a domestic and international level,” and it was undoubtedly successful in doing so, but for all the after-luncheon talk about globalism, international outreach and world-class academic and corporate expertise, it was pleasant to notice that Ireland and Notre Dame are never very far from one another.