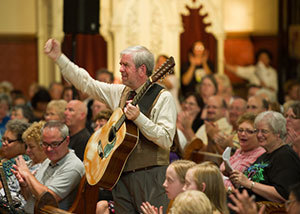 Preaching in the fourth century, St. Augustine is supposed to have said that a person who sings prays twice. Scholars have quibbled about the attribution over the centuries since, but whether or not the words are truly Augustine’s, Christians at worship have always taken them as true.

Steve Warner certainly has. As director of the University of Notre Dame Folk Choir, he works in an area where performance art and pastoral theology intersect, freely admitting that “I’ve come to ask, in all my diverse labors with this ensemble, a simple question. Why do I continue to do what I do, except for God? Why pour so much time and energy into diphthongs, consonants, standing order in the choir loft, repertoire selection, tuning, glottal stops, breathing techniques, except for God? Except for our ability to touch the human heart, to allow music to effect a conversion experience, an ineffable, inescapable landscape of joy and meaning to this life. Why do any of it, except for this holy purpose?”

Warner’s diverse labors include the composition of hymns, and many of those hymns have become familiar to Catholic parishioners throughout the English-speaking world. “Set Your Heart on the Higher Gifts,” “Make of Our Hands a Throne,” “Crux Fidelis” and Warner’s musical setting of the Lord’s Prayer are all sung and prayed in churches far from the Basilica of the Sacred Heart, where Warner and the Folk Choir sing and pray every Sunday at the 11:45 a.m. Mass.

His most recent composition, “Wake the World with Dawning Joy,” debuted Sunday (Nov. 9) in Chicago at a Mass concluding the 2014 convocation of the National Religious Vocation Conference (NRVC).

The hymn was commissioned by the NRVC for the 2015 Year of Consecrated Life, an observance designated by Pope Francis to renew and reinvigorate the lives and ministries of Catholic religious men and women worldwide and to invite young Catholics to consider religious life.

The kernel of the hymn’s lyrics comes from one of those off-the-cuff remarks for which Pope Francis is increasingly famous. In conversation with a group of superiors from various religious orders last year, the Pope said that “the Church must be attractive. Wake up the world! Be witnesses of a different way of doing things, of acting, of living! It is possible to live differently in this world … It is this witness I expect of you. Religious should be men and women who are able to wake the world up.”

“Pope Francis’ words caught the attention of a number of religious men and women,” said Patrice Tuohy, executive editor of VISION Vocation Guide. “I sent Steve the ‘wake up the world’ quote along with some scripture quotes and some ideas of what we wanted in the song in terms of themes and tone. The main thing we wanted was for the song to be upbeat and singable so that parishes will be able to use the song in liturgies throughout the Year of Consecrated Life and beyond. Steven met and exceeded our expectations for the song in his ‘Wake the World with Dawning Joy.’ It captures the spirit and the hope of religious life. It is inspiring and uplifting and reflects core gospel values.”

“It’s unusual — at least, for me it’s unusual — to build a hymn around the words of a Pope instead of around those of scripture or traditional theology,” Warner says. “But in this one, I was able to take that marvelous imperative, ‘wake up the world,’ apply it to the theological virtues of faith, hope and love, and wrap them all in joy, making it a sort of ‘missioning’ hymn. I really hope that when we sing it, we’ll understand a little better what it means to be sent forth.”