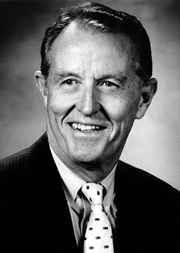 Alumnus Frank E. Eck has made a $21 million gift to the University of Notre Dame for the construction of a second building for theNotre DameLawSchool, as well as a multipurpose facility in a neo-Gothic archway that will link the new structure to the existing building.

The gift is the fifth largest in Notre Dames history, the largest ever to theLawSchool, and one of the largest in the history of American legal education.

Eck Hall will stand on the site of the former post office. It will be connected to the south side of the currentLawSchoolbuilding by Eck Commons, a facility that will feature arches over an east-west walkway.

The generosity of Frank Eck and his family to Notre Dame is legendary, and we once again are tremendously appreciative,said Rev. John I. Jenkins, C.S.C., in accepting the gift on his first day as the Universitys president.The addition to theLawSchool, as well as renovations to the current facility, will enhance the education of our students as superbly qualified professionals attuned to Gospel values and the demands of justice, as well as enable our outstanding faculty to continue and even strengthen their excellent and distinctive scholarly work.

John Affleck-Graves, executive vice president of the University, noted:When added to the approximately $26 million in cash and commitments already received toward the Law School renovation and expansion, this gift is a giant step forward in reaching our total goal of $57.3 million and allows us to retain architects and begin the interior design phase of the project.

Founded in 1869,Notre DameLawSchoolis the nations oldest Catholic law school and one of the oldest university law schools in continuous operation. It enrolls approximately 550 students and consistently ranks in the top tier of national surveys.

The newLawSchoolbuilding will be a powerful testament to our continuing efforts to be a premier law school, faithful to our roots in the Catholic intellectual tradition,said Patricia OHara, Matson Dean of theLawSchool.The dramatic arch connecting the new building to our existing facility will bridge our illustrious past with an even more promising future. Without increasing the size of our student body, the new building will resolve our current classroom and faculty office space difficulties, as well as address our needs for the future.

OHara added:As Father Jenkins said, Frank Eck has always risen to the challenge of supporting his alma mater. On behalf of theLawSchoolfaculty and students, I, too, want to thank him and his family for this extraordinary gift.

Ecks previous benefactions to Notre Dame have endowed a library collection in chemical engineering and underwritten construction of the Eck Tennis Pavilion in 1987, Frank Eck Baseball Stadium in 1994, and theEckCenter, which includes the Hammes Notre Dame Bookstore, visitorscenter and Alumni Association headquarters, in 1999. His gifts to the University total more than $35 million.

A 1944 graduate of Notre Dame, Eck is chairman of Advanced Drainage Systems (ADS) ofColumbus,Ohio. His undergraduate degree is in chemical engineering, and he has served on theCollegeofEngineering Advisory Councilsince 1984. His father, Vincent J. Eck, was graduated from Notre Dame in 1915 with a degree in architecture, and his son, Frank Jr., earned a degree fromNotre DameLawSchoolin 1989 and currently serves on the Law School Advisory Council.

After serving in the U.S. Navy in the latter stages of World War II, Eck attendedHarvardBusinessSchooland earned a masters of business administration degree in 1949. He worked for more than 20 years in the petrochemical industry, then joined ADS in 1973 as vice president for sales and marketing. He soon was appointed president of the firm and has taken it from a small regional manufacturer serving the agriculture market to the worlds largest producer of plastic drainage pipe used primarily in the civil engineering industry.

A longtime supporter of the Irish football, baseball and tennis programs, Eck was made an honorary member of the Notre Dame Monogram Club in 1988.