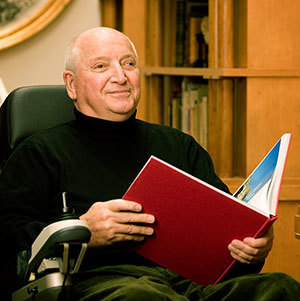 Architect and designer Michael Graves, who received the 2012 Richard H. Driehaus Prize at the University of Notre Dame, will lecture at the School of Architecture at 4:30 p.m. Nov. 28 (Wednesday) in the Bond Hall Auditorium.

Graves, whose celebrated career redefined the architect’s role in society, received the $200,000 Driehaus Prize and a bronze miniature of the Choregic Monument of Lysikrates during a March ceremony in Chicago.

His lecture, “A Grand Tour,” will recount a professional journey once considered obligatory for a young architect — exploring the great monuments of Europe. Receiving the Rome Prize in 1960 as a scholar at the American Academy in Rome, where he is now a trustee, Graves experienced the “timeless grammar” of architecture that has influenced his own work. Members of the Driehaus Prize jury commended his commitment to the traditional city — in its human scale, complexity and vitality — as emblematic of a time-tested sustainability.

Graves is founding principal of the firm Michael Graves & Associates and the Robert Schirmer Professor of Architecture, Emeritus at Princeton University. In structures such as the Portland (Ore.) Public Services Building and Humana Corporation headquarters in Louisville, Kentucky, Graves’s designs are characterized for their attention to detail and dignity. His concern for the character of his buildings extends to his interior design, the lighting, fixtures and furniture that he regards as essential to the overall character he aspires to create.

His influential designs, extending from buildings including the iconic Denver Central Library to everyday objects such as his celebrated Alessi teakettle, reflect the breadth of his interests and the depth of his humanistic instincts. Attention to enhancing the user experience characterizes all his work, from luxury goods to products for Target Stores. The beauty and quality of ordinary objects, Graves believes, have the power to stir the soul.

Established in 2003, the Richard H. Driehaus Prize at the University of Notre Dame, the most significant recognition for classicism in the contemporary built environment, honors a practicing architect for lifetime contributions to traditional, classical and sustainable architecture and urbanism.