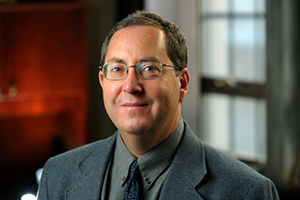 Established in 2008 with a $1 million gift from 1st Source Bank, the award is presented each year to faculty from Notre Dame or the Indiana University School of Medicine-South Bend who have most successfully transitioned their technology from the lab to the marketplace.

Bernstein is the lead inventor of quilt packaging (QP), which is a new way for integrated circuits, or “chips,” to communicate with each other. Rather than using bulky, heavy, expensive and power-hungry packages for each chip, QP allows chips to communicate directly with each other through proprietary interconnect structures fabricated along their edges.

The chips can be any shape, and are tiled along their edges to make a larger circuit that behaves just like a large chip, except that it is made from multiple smaller chips. This is reminiscent of quilting a blanket from small patches of cloth. For that reason, Bernstein coined the term “quilt packaging,” and the arrays of chips are called “quilts.”

Quilt packaging addresses the bottleneck in electronic systems performance that results from signal and power losses in the chip interconnects, the hardware between integrated circuits on an electronic printed circuit board. The electronics industry is investing billions of dollars to develop various solutions to this problem, such as stacking chips on each other.

Quilt packaging places chips in direct contact with each other along their edges like the panels of a quilt, the squares on a checkerboard or tiles used in a domino game. This is a unique configuration that exists nowhere else in the microelectronics space.

Over the last six years, Bernstein has worked closely with Jason Kulick, CEO, in launching Indiana Integrated Circuits LLC, which is located in Innovation Park at Notre Dame. Bernstein co-founded the company and contributed to early technical and business discussions with industry.

Bernstein was named the 2014 Indiana Master of Innovation by the IEDC and Forbes Inc. at the November Forbes Reinventing America: The Innovation Summit in Indianapolis.

The 1st Source Award, which carries a $20,000 cash prize, was presented Tuesday (April 12) at the Gillespie Center with the theme “It Takes a Village to Commercialize a Great Idea.”

In addition to Bernstein, other individuals and organizations honored for their work in 2015 included:

The keynote speaker at this year’s event was Jim Schellinger, president of the Indiana Economic Development Corp. and chairman and CEO of CSO Architects.