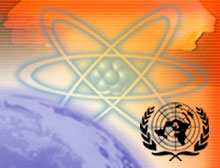 At a time when nuclear threats from North Korea and Iran have the world on edge, 17 University of Notre Dame students will spend their fall break (Oct. 14 to 21) in Europe meeting with leaders of organizations committed to controlling the proliferation of nuclear arms and other weapons of mass destruction (WMD).

The students are enrolled in a new seminar titled(Non-)Proliferation of WMD,taught by political scientist Luc Reydams, who will lead the European field trip.

Among the officials with whom they will meet is Ambassador Greg Schulte, the permanentU.S.representative to the International Atomic Energy Agency, the United Nations office inVienna, and other international organizations inVienna. He is responsible for advancingU.S.policies regarding proliferation, terrorism, organized crime and corruption, while promoting the peaceful use of nuclear energy.

InBelgium, they will tour World War I battlegrounds, the cemetery at Flanders Field and the town ofYpres, where chemical weapons were first used in war.

In addition to the tour, the students are reading five texts on nuclear, chemical and biological weapons, their proliferation, global efforts to reduce their numbers, and the technology and politics related to WMDs. They also are viewing several documentaries and lectures, including talks delivered during a 2005 series at Notre Dame titledThoughts on the Unthinkable.

Reydams organized the seminar after serving as a guess lecturer in a course titledNuclear Weapons and Nuclear Warfare.Taught by Michael Wiescher, professor of physics, the course examines the physics and technological aspects of nuclear weapons and associated ethical, legal and social issues.

Reydams earned degrees in law and in political and administrative sciences from Katholieke Universiteit Leuven and Université Catholique de Louvain. He practiced law inBrussels,Belgium, before coming to Notre Dame to earn two law degrees through the Universitys Center for Civil and Human Rights. His bookUniversal Jurisdiction: International and Municipal Legal Perspectiveswas published in 2003 by Oxford University Press.

The European field trip is sponsored with a grant from the Undergraduate Intellectual Initiative in Notre DamesCollegeofArtsand Letters.