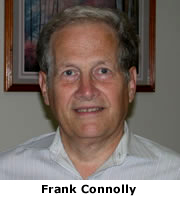 At first, he did it for fun and, he says, for the joy of making Notre Dames mathematics majorscompetitive with the best  in the country.

Today, hes doing it to fulfill a $1.45 million grant from the National Science Foundation (NSF), which has rewarded his ingenuity with the largest of fourMentoring Through Critical Transition Pointsgrants awarded to variousU.S.universities. The grants support NSFs goal of preserving and expanding the pool of research mathematicians, whose work is essential for breakthroughs in scientific as well as mathematics fields.

In Connollys case, the foundation is investing not in an experiment, but in something that is known to work.

Connolly received word of the five-year grant in late June. The money allows him to expand many efforts he has been undertaking since 1990 in a program named Seminar for Undergraduate Mathematical Research (SUMR). The accelerated curriculum was designed to help students discover what Connolly callsthe beautyof mathematics, and to develop the personal conviction that they can be successful in mathematics and in the best graduate programs in the country.

By fall, the influence of the grant will be felt with the distribution of scholarships to sophomores, juniors and seniors who commit to the Honors Mathematics Program,which prepares students for graduate studies and research careers in the mathematical sciences.

Word of the scholarships has spread, inspiring an increase in the number of students committing to the honors program, from six last year to 13 this coming fall, Connolly says.

Also during the coming academic year, funding will allow the program to pair undergraduates with graduate students in seminars that explore new mathematics topics. In fall 2007, Notre Dame will welcome its first SUMR postdoctoral faculty member. The candidate will fill a three-year position that supports his or her work and that specifically requires teaching experiences with honors mathematics majors.

The grant also will allow Connolly and the programs supporters to expand a summer undergraduate experience it has been hosting as part of NSFs Research Experience for Undergraduates (REU) program. Some nine undergraduates from Notre Dame and from other university mathematics programs are undertaking advanced mathematical studies on campus this summer as part of the REU program.

Since Connolly began the projects that would become SUMR, some 46 graduates have pursued doctorates or other advanced degrees. In 2000, Misha Gekhtman, associate mathematics professor, began assisting SUMR. Joining Gekhtman and Connolly on the grants management team are mathematics professors Matt Gursky and Alex Hahn, as well as associate professor Claudia Polini. They are pursuing several strategies, including special efforts to recruit female and minority students, Connolly said.