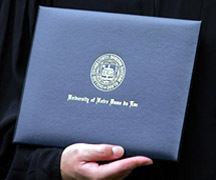 The ceremony will begin at 9 a.m. at Notre Dame Stadium with the Academic Procession. Undergraduate diploma ceremonies for each college and school will be held that afternoon. Graduate and professional ceremonies will take place on May 21 (Saturday).

Gates, the U.S. secretary of defense, will receive an honorary doctor of laws degree. The other honorary degree recipients are:

Michael J. Brennan (doctor of laws) – A professor emeritus of finance at UCLA and the London Business School, Brennan is recognized as one of the leading pioneers in the field of modern finance. His research on the analysis of option contracts and options markets, the role and the price of information in financial markets, and his work in corporate finance have had a major influence on the development of finance as a science. Born in England, he was educated at Oxford University, the University of Pittsburgh and the Massachusetts Institute of Technology.

Shirin Ebadi (doctor of laws) – The recipient of the 2003 Nobel Peace Prize, Ebadi is an Iranian lawyer, a human rights activist and the founder of the Defenders of Human Rights Center in Iran. She was the first woman justice in the history of the Iranian judicial system and was awarded the Nobel Peace Prize for her significant and pioneering efforts for democracy and human rights, especially for women, children and refugees. She has resided in exile in the United Kingdom since 2009.

John W. Glynn (doctor of laws) – A 1962 graduate of Notre Dame, Glynn is founder and president of Glynn Capital Management, a venture capital investment firm in Menlo Park, Calif., and a member of the University’s Board of Trustees. He holds the Thomas MacAvoy chair in entrepreneurship at the University of Virginia and has taught in the MBA programs at Virginia, Stanford University and Cambridge University. He and his wife, Barbara, have endowed a chair in literature at Notre Dame and made a leadership gift to the University to expand and fortify the Glynn Family Honors Program, a joint initiative of the College of Arts and Letters and College of Science.

Michael D. Griffin (doctor of engineering) – A physicist and aerospace engineer, Griffin served from April 2005 to January 2009 as the 11th NASA administrator, overseeing work on the future of human spaceflight, the fate of the Hubble telescope, and the agency’s role in understanding climate change. He previously was NASA’s associate administrator for exploration, and he also has served with NASA’s Jet Propulsion Laboratory and as head of the space department at Johns Hopkins University. Since leaving NASA, he has served as eminent scholar and professor of mechanical and aerospace engineering at the University of Alabama at Huntsville.

Lou Holtz (doctor of laws) – The Notre Dame football coach from 1986 to 1996 and a member of the College Football Hall of Fame, Holtz led the Irish to the 1988 national championship and coached the most games and has the second-most victories in university history. On three occasions in his tenure, the Irish had the highest graduation rate among Division I-A football programs. He and his wife, Beth, have been active in philanthropic efforts such as the Touching Tiny Lives Foundation and the Women’s Care Center of the Diocese of Fort Wayne-South Bend.

Bishop Gerald Kicanas (doctor of laws) – The bishop of Tucson, Ariz., Bishop Kicanas is a native of Chicago who was ordained a priest of the Archdiocese of Chicago in 1967. He earned his licentiate in sacred theology from the University of St. Mary of the Lake and a master’s degree in guidance and counseling and doctorate in educational psychology from Loyola University. He held various positions in 25 years of ministry in the Chicago archdiocese’s seminary system before being appointed coadjutor bishop of Tucson by Pope John Paul II in 2001, then becoming bishop two years later. A past vice president of the U.S. Conference of Catholic Bishops, he has promoted Catholic education by partnering with Notre Dame’s Alliance for Catholic Education to establish three ACE Academy schools in the Diocese of Tucson.

Huguette Labelle (doctor of laws) – The chancellor of the University of Ottawa, Labelle is considered a global leader in anti-corruption efforts. She is chair of the board of Transparency International, an organization that promotes transparency in elections, public administration, procurement and business, and a member of the board of the United Nations Global Compact, an initiative for businesses that are committed to aligning their operations and strategies with 10 universally accepted principles in the areas of human rights, labor, environment and anti-corruption. Labelle earned four degrees from the University of Ottawa and has served as its chancellor since 2004.

Laurent Lafforgue (doctor of science) – A French mathematician, Lafforgue is a professor at the Institut des Hautes Études Scientifiques. He was the recipient of the 2002 Fields Medal – the mathematical equivalent of the Nobel Prize – for his work related to the Langlands Program in number theory. His contributions allowed powerful tools from algebraic geometry to be applied to number theory. In addition to his scientific accomplishments, Lafforgue is actively engaged in issues related to French public education, proposing the adoption of a new set of standards for the nation’s schools.

Charles F. “Chuck” Lennon (doctor of laws) – The associate vice president for University Relations, Lennon has served for 30 years as the executive director of the Notre Dame Alumni Association, from which he will retire in June. Under his leadership, the association has become a model in higher education, with innovative programs for continuing education and community service, the creation of the Black, Hispanic, Asian Pacific and Native American alumni groups, and expanded roles for women, senior, young and international alumni. The association has grown from 151 to 276 alumni clubs worldwide during Lennon’s tenure. He earned bachelor’s and master’s degrees from the University and was a member of the Irish baseball team as an undergraduate.

John C. Mather (doctor of science) – A co-recipient of the 2006 Nobel Prize for physics, Mather is a senior astrophysicist in the Observational Cosmology Laboratory at NASA’s Goddard Space Flight Center and senior project scientist for the James Webb Space Telescope. He and George Smoot received the Nobel Prize for their development of the Cosmic Background Explorer satellite project that transformed the study of the early universe from a largely theoretical pursuit into direct observation and measurement. He and his wife, Jane, established a foundation with Nobel funds to support a variety of science initiatives.

Jacqueline Novogratz (doctor of laws) – Novogratz is the founder and chief executive officer of the Acumen Fund, a global nonprofit venture that is devoted to providing philanthropic capital to invest in scalable businesses in order to empower people to make their own decisions through capitalistic investments rather than just charity. Established in 2001, the fund has invested more than $40 million in over 35 companies serving some 25 million low-income customers in the developing countries of the world. Novogratz began her career in international banking with Chase Manhattan Bank.

Mary Beth O’Brien (doctor of laws) – For more than 50 years, O’Brien has dedicated her time and talent to working with the Ladies of Charity USA (LCUSA), the American affiliate of the international organization founded in the 17th century in France by St. Vincent DePaul to respond to the needs of the poor. She has served as president of LCUSA, a representative at the United Nations for the International Association of Charities, a trustee of Catholic Charities USA, and a member of the American Housing Foundation. Her late husband, Frank, was a Notre Dame alumnus and member of the College of Engineering Advisory Council, and all six of their children are graduates of the University.